The 2017 digitally based reading assessment comprised ten distinct sets of texts and questions at grade 4. Each student assessed typically read two texts and answered approximately 20 questions about them. Questions are presented in multiple-choice and constructed-response (open-ended) formats. Each question in the assessment is classified according to one of three cognitive targets: locate/recall, integrate/interpret, and critique/evaluate as specified in The NAEP reading framework. The cognitive targets refer to the kinds of thinking that come into play when reading and making meaning from written texts. A mix of cognitive targets across the questions about a text intends to elicit a range of reading behaviors and to engage students to think about the text in different ways.

A story and three sample questions from a set administered to fourth-graders in the 2017 reading assessment can be viewed below. You may also experience the full set as students did during the assessment. Details for each sample question include the correct answer, student performance data, sample student responses, and scoring guides. Also included for each question is a â€œstudent actionâ€ captured by the digital delivery of the assessment. The student action provides insight into how students interacted when reading this particular story and responding to each of these questions. That is, the student actions are specific to these questions and do not describe fourth-gradersâ€™ reading behavior in general. Following the questions, you can view a time-lapse feature showing how students moved between the story and the questions during the 30-minute assessment time. 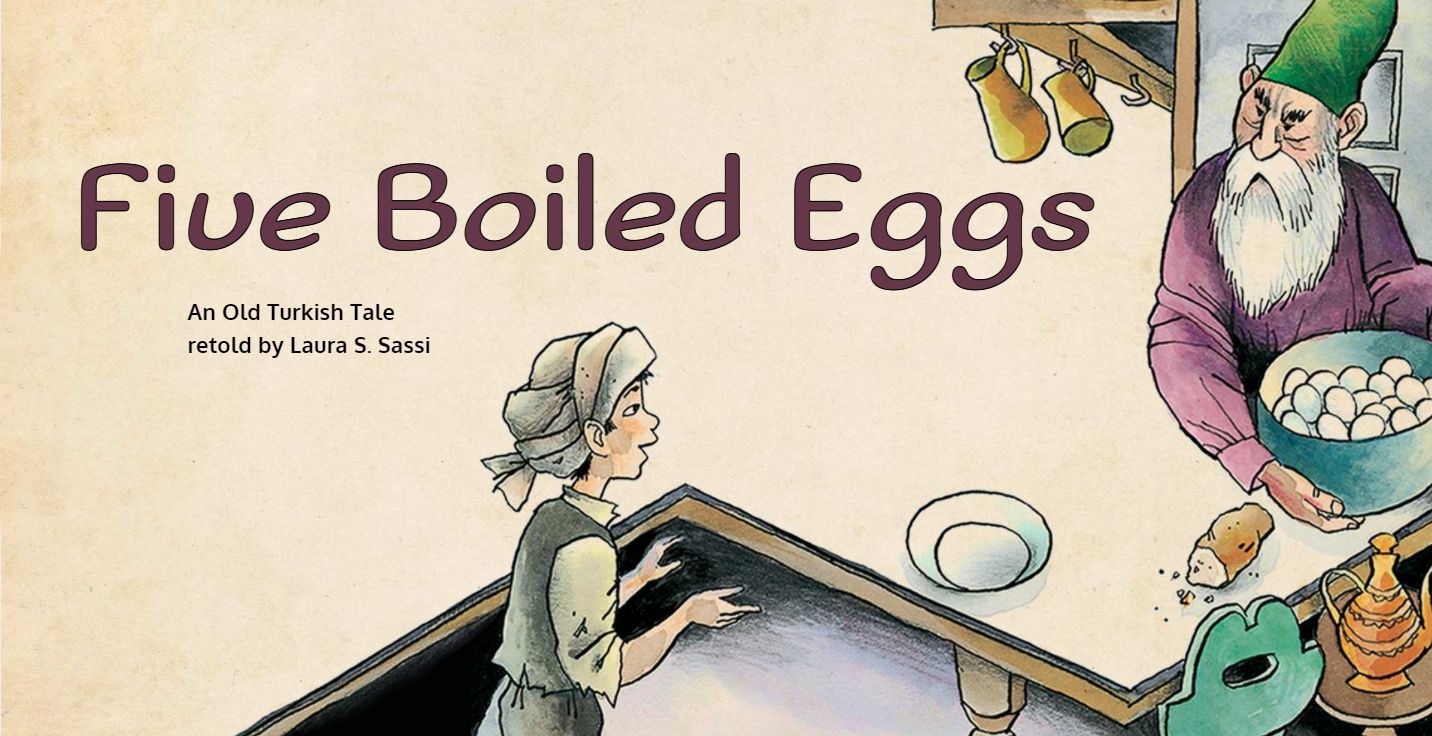 Introduction: Nasreddin Hodja, a character in this story, is familiar in many Turkish legends. "Hodja" means teacher.

Long ago, a poor country boy left home to seek his fortune. Day and night he traveled, stopping to eat at inns along the way. Though he ate sparingly, his money quickly dwindled until, one day, no silver akches* remained.

Still, the boy kept walking. Soon, however, his empty belly began to ache. Staggering up to the next inn he saw, he approached the innkeeper.

"I'll see what I can spare," the innkeeper grumbled. He took five boiled eggs out of a large bowl and put them on a plate with some stale bread. "Here," he said, plopping the platter in front of the boy.

The famished lad gratefully gobbled every morsel. Then, repeating his promise to pay back the innkeeper, he journeyed on.

Revived by his five-egg breakfast, the boy soon reached a bustling seaport. Intent on finding his fortune, he set sail on the first ship that was leaving the harbor.

Years passed, and the lad prospered. As a sea merchant, he sailed far, stopping in many exotic ports. However, he never forgot his humble beginnings or the money he owed the innkeeper.

When he finally returned home, he stopped by the old roadside inn.

*An akche is a unit of Turkish money.

"Kind sir," he respectfully inquired, "how much for the five boiled eggs that you served me so long ago?"

In truth, the innkeeper did not remember him, for this fine-looking fellow looked nothing like the scrawny lad who had begged for food some ten years before. Still, eager to make a profit, he readily added up the charges. "That'll be ten thousand akches," he declared.

"For five eggs?" The rich stranger gasped. He had thought that he would have to pay no more than ten or twenty akches.

When the stunned merchant refused to pay, the innkeeper declared that he would take him to court.

A trial was set for the following week. Alas, rumor had it that the judge was a close friend of the innkeeper.

"I'm ruined!" the merchant muttered as he sat in the village square. "What will I do?"

At that moment, he was approached by a sturdy little man wearing a white turban and riding a donkey. "Nasreddin Hodja, at your service," the man said with a friendly nod. "What seems to be the problem?"

After hearing the merchant's story, Hodja announced, "This is your lucky day! It would be my honor to defend you. I have great experience in these matters."

"Thank you," the merchant said, amazed at his good fortune. But when the court date finally arrived, Nasreddin Hodja was nowhere in sight.

"Woe is me," mumbled the merchant.

"Where is Hodja?" demanded the judge, growing angrier by the minute. He was about to render judgment in the innkeeper's favor when Hodja boldly barged in.

"Pardon me," he said, panting, as he hastily took the witness stand. "I would have been here sooner, but this morning I had the cleverest plan. Instead of eating my boiled corn for breakfast, I planted it. Think of the rich harvest I'll reap!"

"That's absurd," the innkeeper scoffed. "You can't grow corn from cooked kernels!" "Indeed?" Hodja said with mock wonder. "Then, sir, how is it that you would have been able to hatch chickens from boiled eggs?"

At that, the whole room reeled with laughter.

"Order in the court!" shouted the judge, pounding his gavel and scowling at the innkeeper.

The judge then ruled that the merchant would not have to pay even one akche for the eggs. Instead, the innkeeper would have to pay a fine for wasting the court's time with such foolishness.

The innkeeper says the merchant owes him ten thousand akches. What reason does the innkeeper give for that amount?

52% of students chose (C) the correct answer. Fourth-grade students who selected the correct answer connected details across a few paragraphs to recognize why the innkeeper asks for so much money. Although the innkeeper says explicitly â€œHad you not eaten those eggs, they would have hatched into hens,â€ the reader needs to recognize this as the reason for the high price he asks for in a previous paragraph.

NOTE: Detail may not sum to totals because of rounding.

Student Action: Because the question asks about a paragraph that appears on page 3 of the story, it is relevant to know whether students revisited the page when responding to the question. Most fourth-grade students did not revisit page 3 of the story when responding to this question. Of students who answered correctly, a lower percentage revisited the page than those who did not.

Percentage of fourth-grade students, by whether they correctly answered the question and whether they revisited page 3 of the story before responding: 2017

Do you think that the innkeeper changes in the story? Use specific information from the beginning and end of the story to support your opinion.

Responses at this level provide an opinion about whether the innkeeper changes, and use specific information from both the beginning and end of the story to support the opinion.

Responses at this level provide an opinion about whether the innkeeper changes and make an explicit statement about the innkeeperâ€™s character, but use specific information from only one part of the story to support the opinion.

Yes, I definitely think the innkeeper changes in the story. Towards the beginning of the story, it says "I'll see what I can spare,' the innkeeper grumbled. He took five boiled eggs out of a large bowl and put them on a plate with some stale bread. 'Here,' he said plopping the platter in front of the boy." This shows that the innkeeper was kind and charitable because he gave some of his food away to a boy who needed it more than he did. But, towards the end of the story, the innkeeper got greedy. He had said "That'll be thousand akches." This shows greediness because out of the kindness of his heart, the boy came back to pay. The innkeeper capitalized on this opportunity by asking for much more money than what he gave was worth.

24% of students provided a response scored Extensive or Essential. Fourth-grade students who received the top score of Extensive evaluated the character of the innkeeper to form an opinion as to whether or not he had changed and provided support from both the beginning and the end of the story. Students who received a score of Essential provided an opinion as to whether the character changed, but supported their opinion with information from either the beginning or the end of the story. While students were asked to provide support from the beginning and end of the story, they needed to use their understanding of the entire text to evaluate whether the innkeeper had changed.

NOTE: Detail may not sum to totals because the percentage of responses rated as "Off-task" is not shown. Off-task responses are those that do not provide any information related to the assessment task.

Percentage of fourth-grade students, by question scoring level and whether they revisited two or more pages of the story before responding: 2017

NOTE: Detail may not sum to totals because of rounding.
Interpret dialogue and story action
Multiple choice
Integrate/Interpret
46% Correct
show

Why does the judge decide that the merchant does not have to pay?

46% of students chose (A) the correct answer. Fourth-grade students who selected the correct answer recognized an interpretation of a characterâ€™s action based on concrete details in the story. While the relevant text is contained in four paragraphs, the reader needs to interpret both the dialogue and the actions in order to understand why the judge decides that the merchant does not have to pay. That is, students were able to infer that the character, Hodja, has made a mockery of the innkeeperâ€™s reason for demanding a large payment.

# Rounds to zero.
NOTE: Detail may not sum to totals because of rounding.

Student Action: Because the question asks about the ending of the story, it is relevant to know if students revisited the last page of the story when responding to the question. Very few fourth-graders, approximately 9 percent, revisited the page when responding to this question. Fourth-grade students who answered this question correctly had a similar probability of revisiting the last page of the story as those students who did not choose the correct answer.

Percentage of fourth-grade students, by whether they correctly answered the question and whether they revisited the last page of the story before responding: 2017

NOTE: Detail may not sum to totals because of rounding.
See time lapse visualization
show

All the passages and questions released from the 2017 reading assessment are available in the NAEP Questions Tool.

Next on this page:

You can experience the digitally based reading assessment as students did.

Read the story and take the full set of questions

To view these questions in eNAEP, you will need to use Chrome (48 or higher). The questions are best viewed at a zoom of 67 percent.

Next on this page: